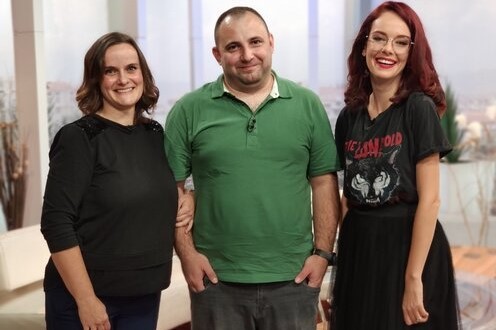 Dimitar Gamishev - telecommunications engineer, and Mihaela Naidenova-Myumyun - specialist Analysis and control of business processes in Neterra, were guests on the talk show "Closer" on BNT 1 TV. They spoke about their hobby as members of the amateur radio club of Neterra LZ1KRN.

"Amateur radio is a way to understand how things work. We know that radio communications are the basis of all modern communications. For me, it is interesting to construct something myself and be able to connect with another person I do not know, even if he is thousands of kilometers away from me, said Dimitar.

"Wi-Fi does not replace everything - including the microphones we are using at the moment, work with radio waves," added Michaela in response to a question from the presenter why they are engaged in amateur radio in the Internet age.

Neterra employees told about the identification signs of the radio amateurs, which for Bulgaria start with LZ, followed by a number - the even ones are for the northern part, and the odd ones - for the southern part. For clubs, the next letter is K - LZ1K and other letters follow.

To become a radio amateur, you must have the desire to study and be a member of a club, and if you want to acquire an amateur radio class - to pass an exam through the Communications Regulation Commission.

There are two classes - first and second. The first is higher. In radio amateurism there are different people - operators who like to talk on the radio, constructors whose passion is to construct useful things related to the hobby, there are also competitors who prefer to do the so-called RDF - "fox hunting" or radio detection. And there is telegraphy.

Mihaela showed her first radio station for ultrashort waves, which works only on amateur radio frequencies. She explained that there are repeaters everywhere in Bulgaria, they amplify the signal from small radio stations so that it can reach longer distances. As a result, with such a small radio station, one can connect to someone outside the area of the city. "We wear them in the mountains when we go hiking," said Michaela.

Radio amateurs use the so-called hardware diaries, which nowadays have a variety of electronic versions. They write down information about radio connections - on what date, at what time, with whom they contacted, at what distance, and with what quality the connection was, how clean was the broadcast.

Another tradition in amateur radio is that when a connection is made with someone, the two parties exchange QSL cards - confirmation of the radio connection. Nowadays, these cards are often filled out on a computer and sent over the Internet.

Every Saturday and Sunday there are amateur radio competitions - contests. The goal is to make as many and as far radio connections as possible. The prizes are not of great material value - most often they are plaques or cards.

"It's funny because we are a large group of people, we visit different places, it's related to logistics, antennas, supplies, climbing high, because with VHF the higher you are, the less noisy it is, and you have the option for further radio connections. The competitions are held by sitting on the radio station and shouting "CQ", which means "I call everyone", said Dimitar.

The goal is for someone on the other side to answer the call. The points are formed by various factors, but mostly by the distance of the connection. There are different ways to make a radio connection - long and short. The long road is when you go around the globe to reach the correspondent.

LZ1KRM radio amateurs have made radio contacts with people from all continents of the planet, and among their most distant connections are with Australia, the USA, Japan, and others.

In amateur radio, each country has its own prefix, and the Earth is divided into squares. It is considered an achievement to have made radio contacts with all countries in a region. This rarely happens, you have to hit the right moment and you are very lucky.

There are about 6000 radio amateurs in Bulgaria. Among them, there are people who practice other sports such as hang gliding, paragliding, mountain climbing. Through radio stations, they can count on being able to connect with their colleagues through a repeater in different situations, even in places where mobile operators do not have coverage.