Krum Krumov has published a book "Around Iceland in 14 Days" 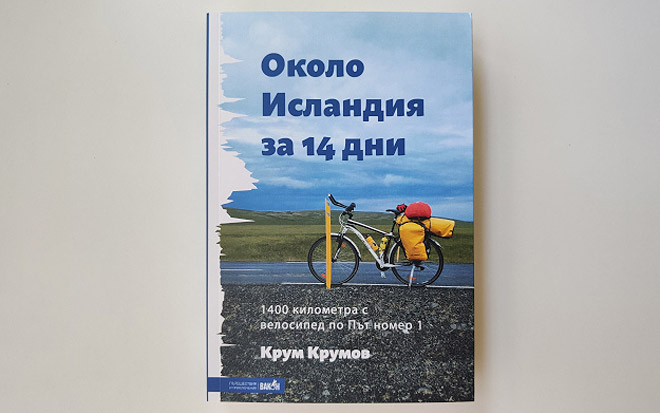 Krum Krumov published his long-awaited book "Around Iceland in 14 Days", dedicated to his brave journey - a cycling tour of Iceland in 2017. The trip was supported by Neterra, and Krum tells how he came to the decision to turn to the Bulgarian Telecom:

I remember the exact date - June 22, 2017. I was sitting at the desk and holding the small triangular calendar of the telecommunications company "Neterra" - a gift from my father. I looked at the numbers that merged before my eyes. There were three weeks until the flight I was below the line, with no prospect of the situation turning upside down. "Neterra," I thought, "is the pioneer of the Bulgarian Internet." My father had told me many times the history of the company and its path to success as a classic American success story. Hard work, extraordinary intellect, courage, and innovation were the first! And if I am the first Bulgarian to travel around Iceland by bike, maybe the first Bulgarian internet company could support me in this endeavor? Without thinking, I grabbed the idea and wrote the outpouring that came to mind. I was disillusioned. I was so ashamed of the action I was about to take. But sometimes travel is also an art and it requires sacrifices. I stepped on my pride, took a deep breath, closed my eyes, and exhaled to press the key. Sent. Now let what is written happen.

The answer arrived a few days later. Neterra's board of directors had decided to support me by covering a significant part of the cost of touring Iceland by bicycle. All I had to do was to take the new Netfleet GPS device with me and keep it alive as I toured Iceland. "All the doors in my house in Poland slammed shut, and I entered through the Bulgarian window," I thought. I never knew I was capable of such an action, and for a long time I could not decide whether to be ashamed or to rejoice in what I had achieved."

The book "Around Iceland in 14 days" will meet you with the people, nature, and beauty of Iceland. Krum describes the country as unpredictable and magical. He shares impressive stories about the Icelandic wind, breathtaking views, the philosophy of the Way, and a reminder that elegant simplicity is often the best solution in life.

Neterra is happy to be a part of this journey!